My thoughts on Saya no Uta

Having heard it was considered a horror classic, I was excited!! People gave it a lot of high praise. Saya no Uta definetly had a particularly strong opening, no bullshit, it just thrusts you straight into Fuminori's horrifying world. Sitting at a cafe made of flesh, talking to his friends to appear to him as disgusting creatures. The gore is very visceral, the CGs and the writing painting a very vivid picture in your mind. I actually ended up needing to take breaks, because it scared me so bad.

Fuminori was in a car accident, and as a side effect of an experimental brain treatment, he's left seeing the entire world as a world of flesh. 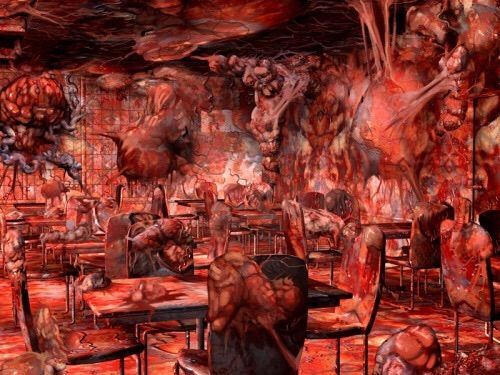 this is what the world looks like to fuminori. like. all of the time. 24/7. id lose it too.

Because of how he sees the world, his relationship with his friends, including a girl named Yoh who has a crush on him, ends up becoming very very strained.

He even avoids doctors appointments, and he avoids telling his doctor out of fear that he might end up insitutionalised. 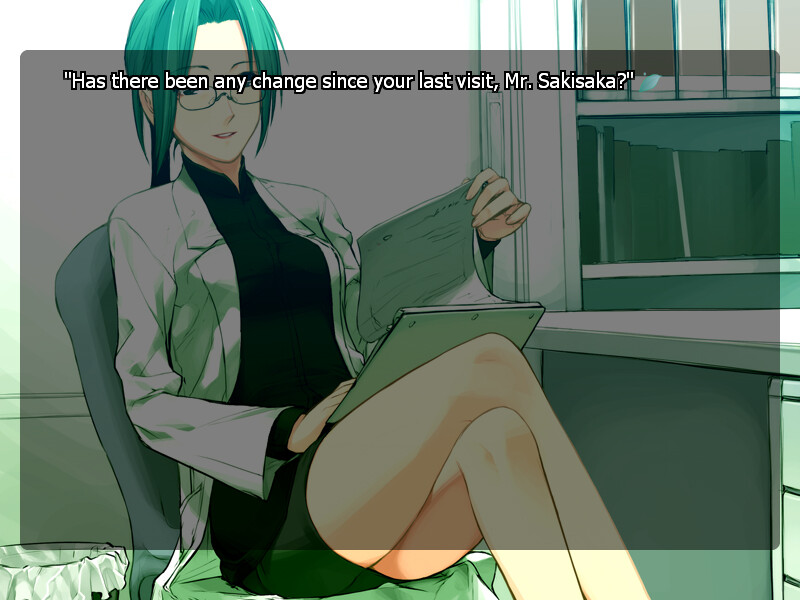 The only thing keeping him tethered to the world is a girl named Saya, the only person who appears to him as a normal human - because she in reality is an Eldrich being. This premise slaps. 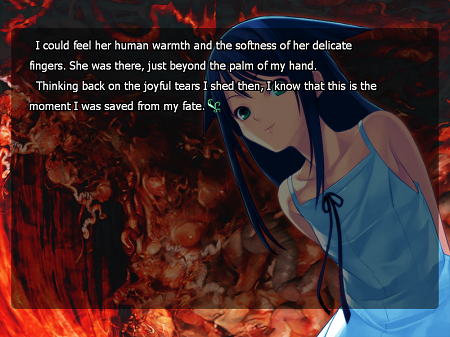 The pedophilic undertones to Saya and Fuminori's relationship was uncomfortable. Saya is described as looking "child-like" to Fuminori. And I'm left unsure whether or not this was meant to be part of the horror - or that was part of a fantasy for some readers. It left a sour taste in my mouth.

I actually found Saya's character very compelling, especially when it explored her loneliness. I found her quite sad…? There was an ending inwhere Saya gets rid of Fuminori's constant hallucinations - but that came at the cost of him being able to perceive Saya as a human. In this ending you start to see how self-conscious she really is. She wanted to be seen as human, and Fuminori was the only person who saw her that way - leading to her obsession with him. The exploration of their toxic co-dependent relationship was very interesting. It even explored how his relationship with Saya led to him being alienated from what was once his close friends. All Fuminori can think about it getting back home to Saya. 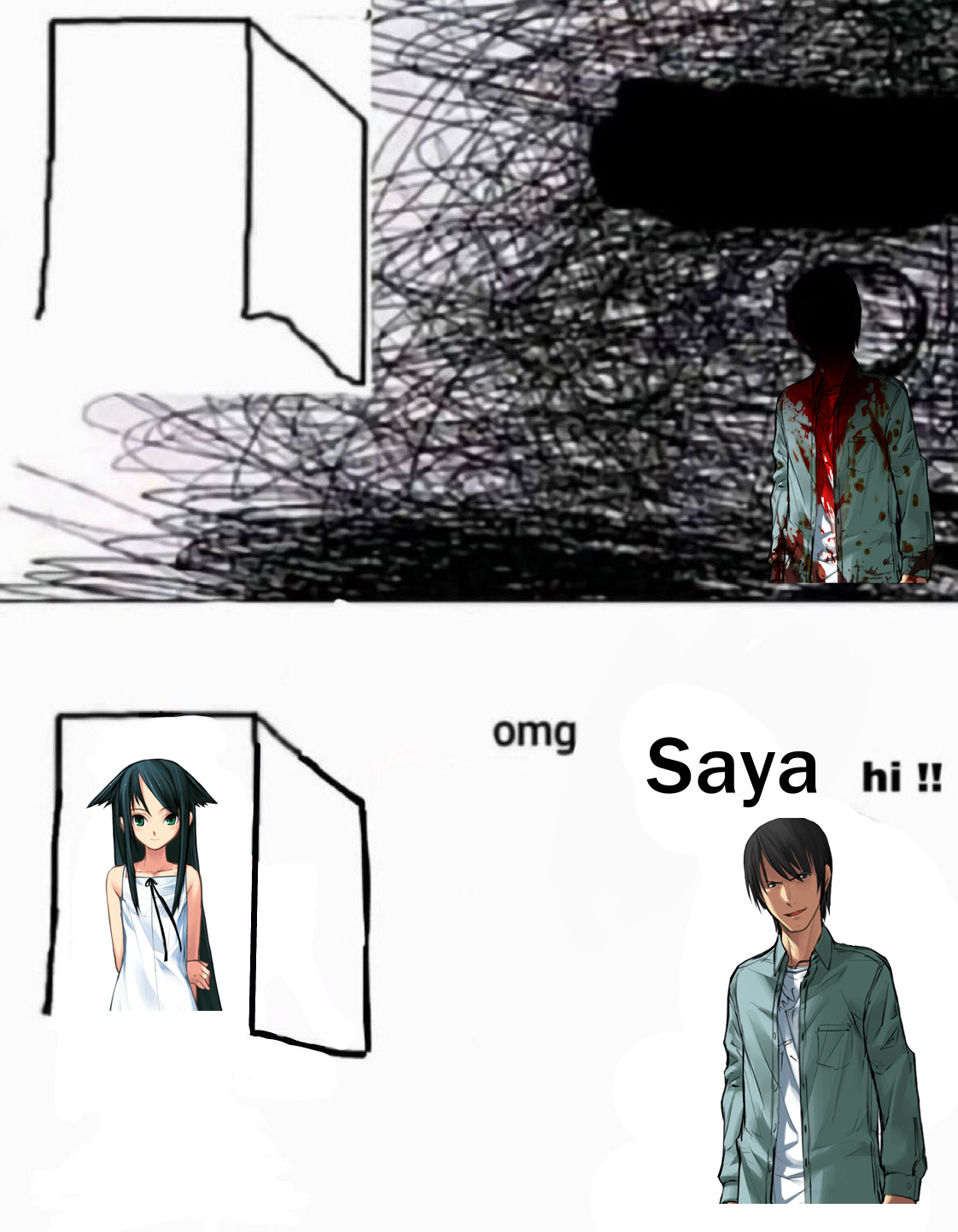 Saya's desire to be seen as human led to her corrupting the mind of neighbor of Fuminori, the scene that comes after this is when the visual novel takes a turn to the worse.

There was a scene where Saya got SA'd. I feel like the scene was just there for shock value, and I tire of writers half-assedly adding rape to their stories because they go "Rapes bad, innit? Yeah I'll put that in. That'll do." It felt lazy.

A similar thing also happens with Yoh. Saya turning her into a monster so that she can appear as human to Fuminori. It only ended in a bunch of non-con H-scenes and just. Eugh. (I am very sensitive to stuff related to SA, so it pretty much gave me a bias against the visual novel.)

To be honest. I am relieved I played the steam version that censored the very worst of it.

The plot does start to kick up again near the end once we see more of the Doctor's perspective. We learn more about her fear of whatever the hell Saya is, and we learn more about Saya, how Saya was raised by a human, what Saya's purpose is and so on. (They gave the Eldrich Abomination body dysmorphia. /J)

I actually really liked the ending where Saya survives - you get shown a really beautiful illustration of Saya growing wings, it looks all angelic, but you know that this is merely what Fuminori is seeing, and your mind is forced to fill in the blanks of what is actually happening in reality. Good shit. 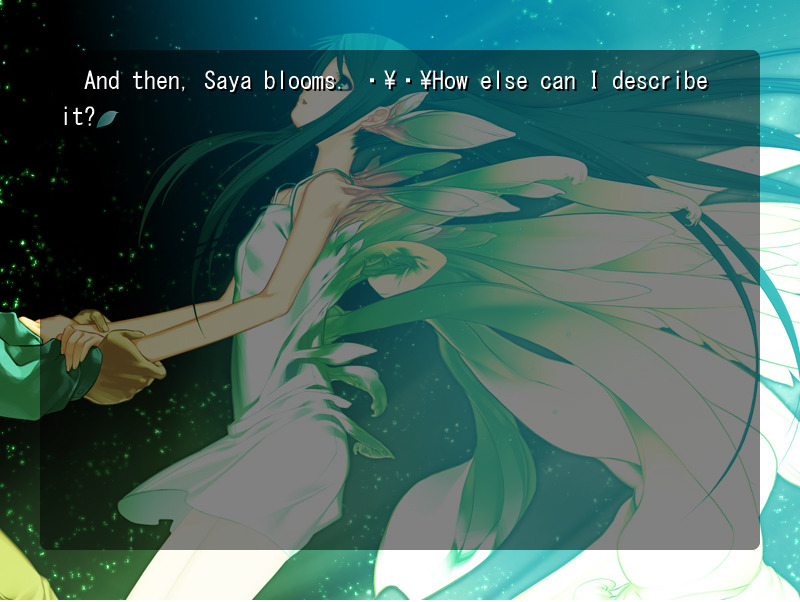 the real saya no uta was inside of saya all along

The other ending was just as good as well, it felt rewarding to see Saya and Fuminori get some commupance after what they did to Yoh.

When I first finished Saya no Uta… I sort of felt… like it was just sort of a "nothing" story, with not much to offer other than shock value, not just through the gore, but also through the way in which Saya and Yoh are treated by the narrative.

I also feel like…. Aside from Saya, and the Doctor, the characters were quite boring - I mean…I can't even remember the name of the dude that joined the Doctor on the quest to kill Saya.

While I do find some of these scenes...objectionable. As much as I hate to admit it: Saya no Uta was a servicable horror story. If I got scared at it, then that means it did it's job along the way. I think I would give it a 5/10 if I had to rate it. I was really expecting it to be better, though. Oh well.